This dataset is now available for downloading.

The Orlando British Women’s Writing Dataset (Release 1: Biography and Bibliography) provides a rich set of linked open data representing women’s literary history from the beginnings to the present, concentrated on writing in English in the British Isles but with tentacles out to other languages, literary traditions, and parts of the world. It emerges from the ongoing experiments in literary history being conducted by the Orlando Project, whose textbase is published and regularly updated and augmented as Orlando: Women’s Writing in the British Isles from the Beginnings to the Present by Cambridge University Press since 2006, and from the Canadian Writing Research Collaboratory’s work in Linked Open Data.

The Orlando Textbase is a semi-structured collection of biocritical entries providing detailed information on the lives and writing of more than 1400 writers with accompanying literary, social, and political materials to provide context to its representation of literary history. It does not contain digitized versions of primary texts.

The internal linking of biographical information is using the Canadian Writing Research Collaboratory (CWRC) ontology, with selective linking out to other ontology terms and linked data entities. The dataset makes extensive use of the Web Annotation Data model, the Simple Event Model, and the BIBFRAME ontology.

How to read the data

You can find a guided reading list on linked data at this page, covering everything from the fundamentals to more advanced topics.

For a quick hands-on introduction to RDF for those without any prior experience, we recommend saving an example from this Mozilla tutorial as an RDF file zoo.rdf and then reading and analyzing it from Python using the RDFLib library. This RDF results in 13 triples describing the relationship between objects and their properties.

You can then print all the triples:

resulting in the following output (after manual cleanup and reordering):

These triples completely describe all information stored in the RDF-XML file, in a human-readable form. You can also list all predicates of a given subject

and then further filter these data with Python. The 13 triples completely describe all data objects and their connections in the file, so that one could use this information for plotting or reconstructing the original RDF. Note that the source RDF file takes much less space then the resulting triples.

The files are stored in both RDF-XML and RDF-TTL formats, so you can choose the format you like. In addition to using separate generators g.subjects(), g.predicates(), g.objects() as outlined above, you can also list triples that match a given pattern, e.g. a given subject with all possible predicates and objects:

The bibliography file bibliography.ttl provides the data using Terse RDF Triple Language (TTL), and you can read it with RDFLib specifying the format explicitly:

For the list of variables, their description, and how they interact with each other, it is best to consult the CWRC Ontology Specification and the CWRC preamble. The dataset also adopts some external namespaces, classes, and terms listed here. At the beginning of each RDF file you will find all the external vocabularies that are used in that file, e.g.

Consulting these sources in relation to the data is key to understanding the dataset.

To demonstrate the broad type of information in the dataset, the CWRC ontology provides a number of competency questions. For the purpose of this competition, we suggest some more focused questions that the current dataset is positioned to illuminate:

These questions could be approached by visualizations in a range of formats including charts, network graphs, geospatial maps, heat maps, trend visualization, and infographics.

An example of a chart approach

For the research question “What is the relevance of family size to religious affiliation, socioeconomic status, or other factors?”, produce a series of charts (bar, line, pie charts, etc.) that answer this question. These could be 2D or 3D. Make the process interactive so that the user can select the factors for a multi-dimensional visualization.

An example of a network graph approach

What kinds of biographical networks connect British women writers to each other and to other writers? How extensive are kinship networks as opposed to networks based on political or religious affiliation?

An example of a heat map approach

Taking one of the research questions provided above such as “Does social identity become more diverse over time?”, can you represent this as a series of heat maps that plot out social identity (religion, ethnicity, etc.) over time? This could even be in the form of a video such as this one.

An example of trend analysis

The research question “How is the number of publications related to the number of children a woman writer had?” could be illustrated using dynamic graphs, examples of which can be seen in videos of Hans Rosling’s Gapminder visualizations such as this one.

An example of an infographics approach

If you Google Emily Brontë, you will likely come across this infographic: 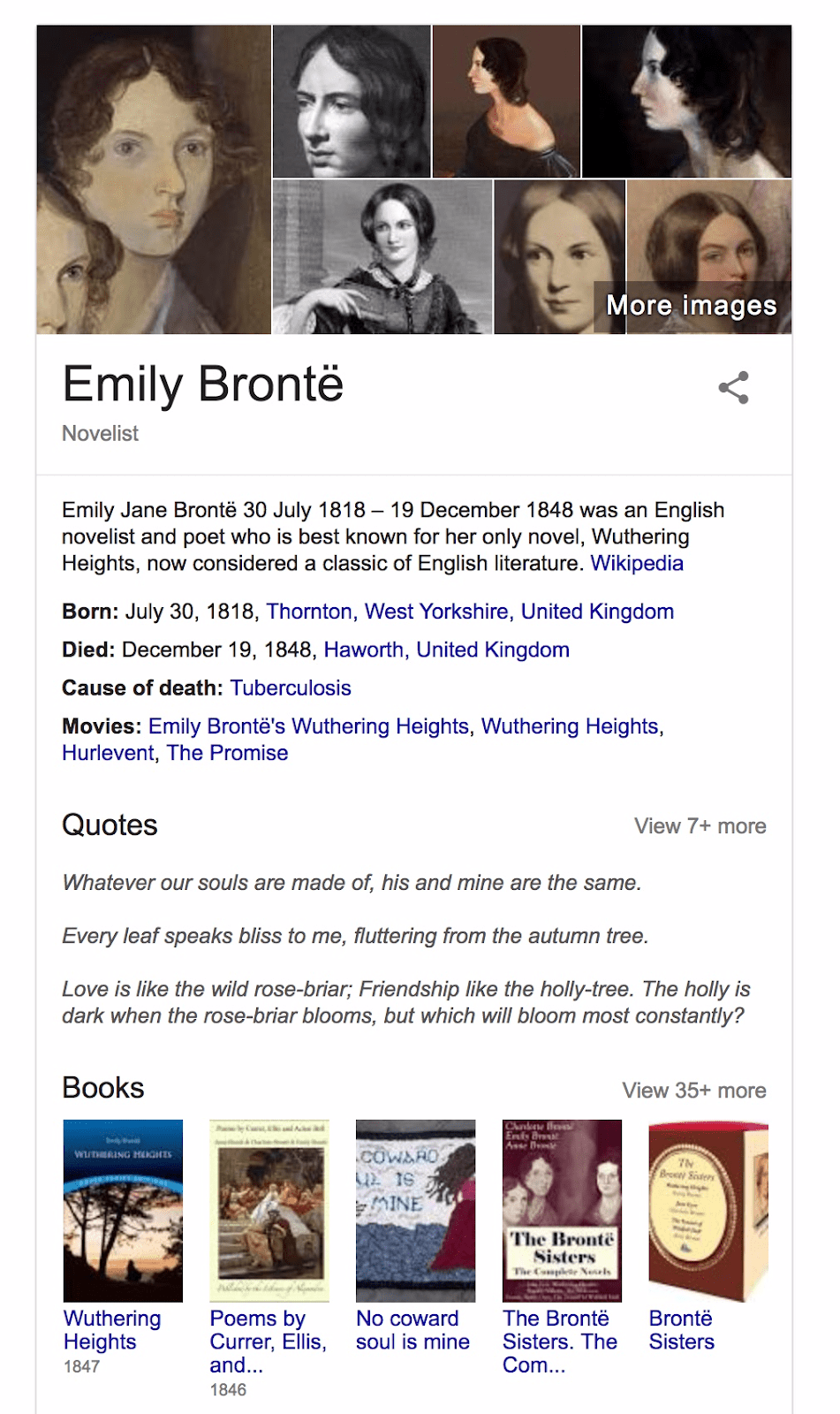 To demonstrate how information can be extracted from the dataset, here we provide a quick visualization of genres over time, along with the Python script behind it, using only bibliography.ttl and no biographical data. In the plot, colour shows the square root of the frequency of a given genre in a given time bin, with 100 bins covering the years 1600-2018. 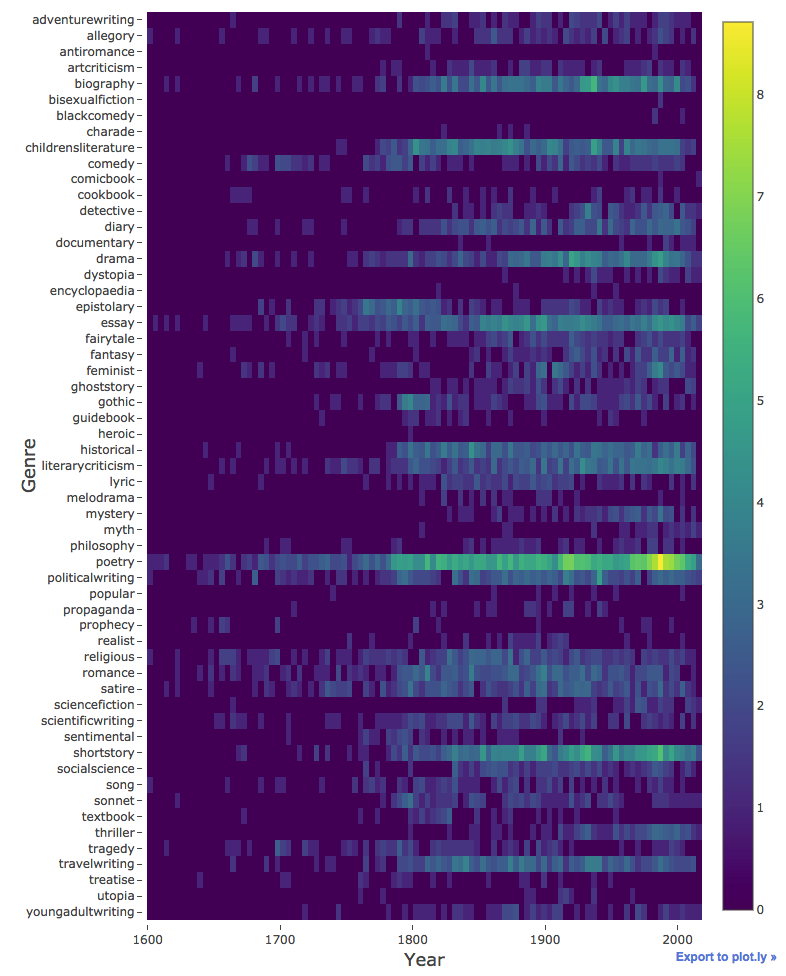 This plot has many shortcomings. For example, it represents absolute and not relative frequency, and it includes newer editions of older books. One way to correct this latter shortcoming would be to eliminate any works that were not published during an author’s life. To do this, you will need to use files in Biography/ folder.

Maps of places associated with women writers in Orlando

These two geospatial visualizations by a researcher show the contrast between the places associated with women writers born in the 17th century (top) as compared to those born in the 20th century (bottom). 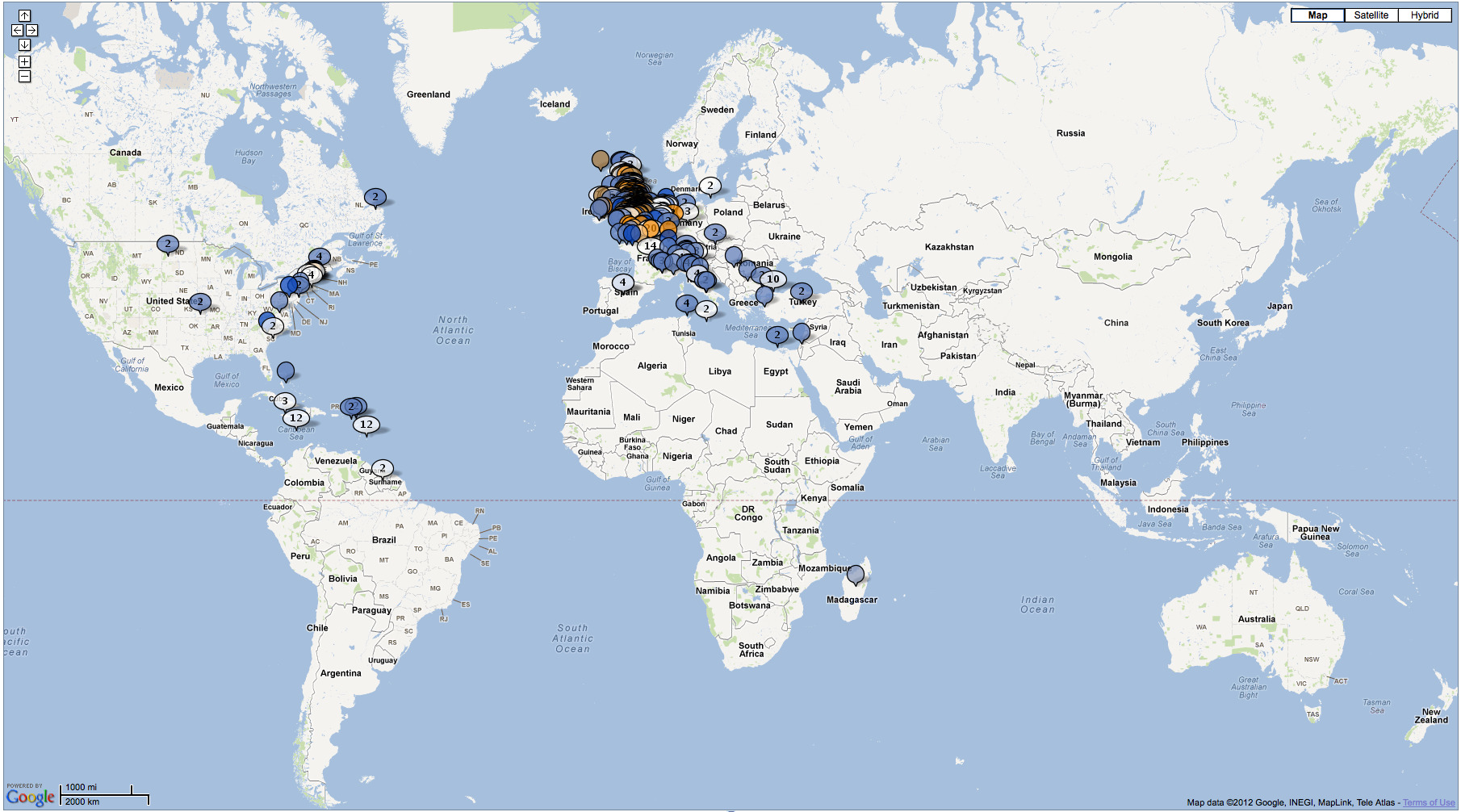 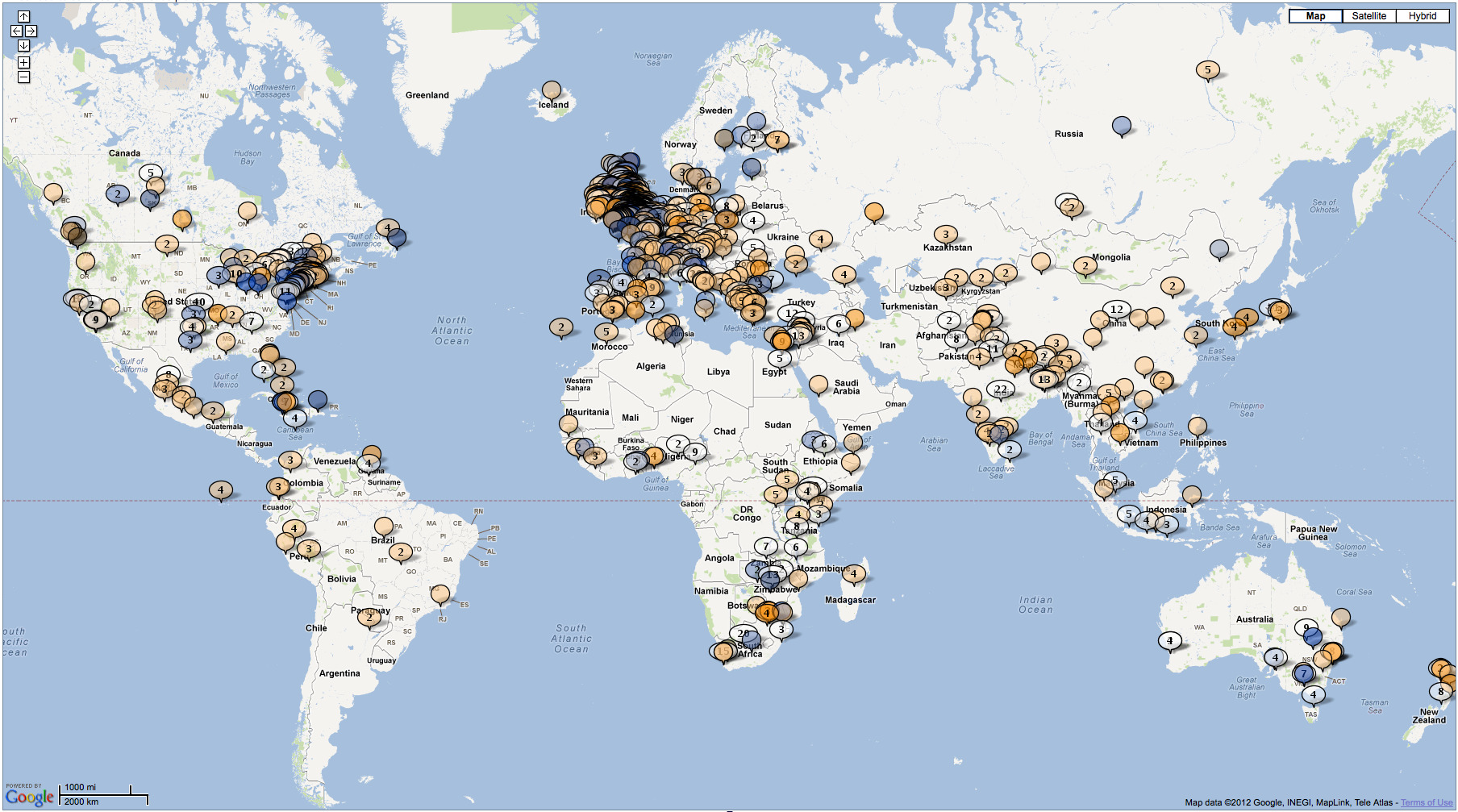 This visualization by a researcher shows the Cultural Forms properties associated with a subset Jewish women writers from the Orlando Project. Each of the pink nodes in the graph is a writer, and the connections between them highlight how they are related: by ethnicity, religion, gender, etc. Click on the image to see the larger version.

Assigning colours to predicates and using them to colour the links probably does not work in this case, as we have too many predicates, but this might give you an idea of the direction you can take. 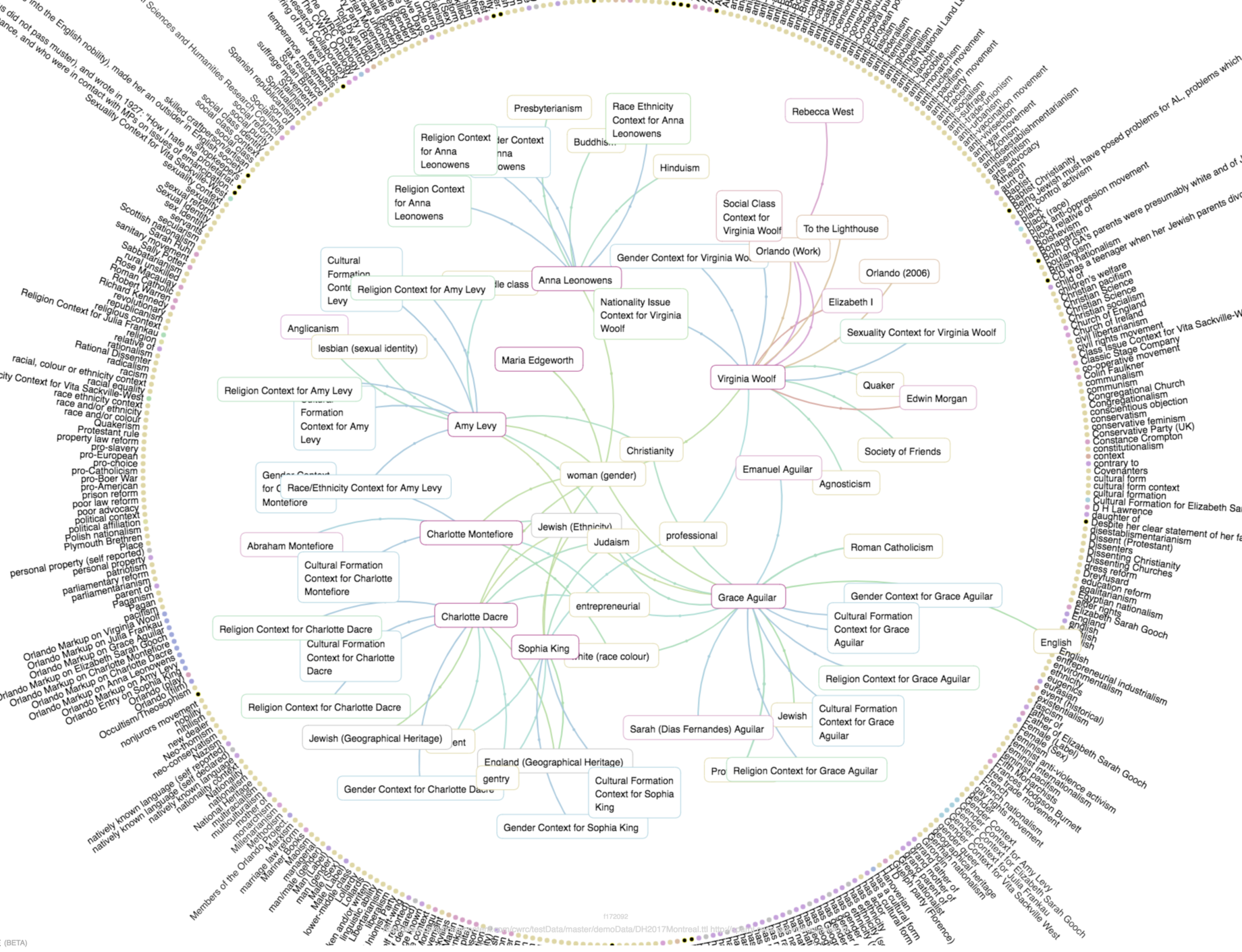